One of the design objectives of the mobile app is that all screens should be viewable in both horizontal mode and vertical mode. This is especially useful for the iOS app, where fields do not adjust automatically to accommodate their content. Note that rotating a screen actually restarts its activity – something that you might not want to do when downloading a large table. 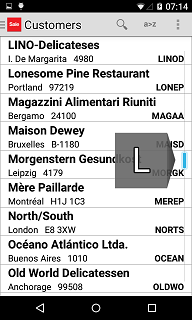 Fast scroll is a mechanism that allows the user to scroll through a list of data much faster than usual. All the larger lists in the mobile app, such as products and customers, support this feature. To use it, tap and hold the tab on the scroll bar.
If a large letter appears, as in the screenshot on the right, then the list supports fast scrolling. To use it, move the tab on the scroll bar, while keeping it held down. The list will scroll much faster than it usually does. The large letter is the first character in the name or id of the item at the top of the screen (depending on how the list is sorted).

When an action bar has too many options to be displayed on the screen, some of them are moved to an overflow menu. When this occurs, an overflow icon appears in the right had corner of the action bar, as shown in the screenshot on the right. When this icon is tapped, the remaining options are displayed as a drop-down list, as shown below.
This is a standard feature of Android, but it is worth mentioning here because not all users are aware of it, and screens in the mobile app have more options than most. So if the text refers to say a map button on the Customers screen, and there does not appear to be one, the user should check the overflow menu. To see if it has been moved there.

Philip Sheard has been working in IT for over 40 years, and on this project for the last 20. His current skills include Java, Android, Objective-C, iOS, PHP, MySQL, ASP.Net, SQL Server, HTML, CSS, Apache and WordPress. View all posts by Philip Sheard